The Kut last year played Balstock in the Rose and Crown which in hindsight was a massive mistake. They should have been in a bigger venue as it was fit to bursting So this year we have them back headlining The Engine stage which should also be bursting at the seams a band not to be missed.

Their live show is just as energetic, with the band voted in as one of the two best acts to play the ‘Dog’s Bed Stage’ after their set at Download Festival 2015. 2015 also saw the band open the main stages of Glastonbudget and Strummercamp and perform a steady stream of tour dates and festivals. The recent ‘Rock Paper Scissors’ tour saw the band perform 17 dates, beginning with a hometown show as support for Teenage Bottlerocket at the Underworld. Previous shows include 2012 Olympics and Paralympics, as selected by the Teenage Rampage Foundation. The band have already been actively touring through 2016, including sets at Camden Rocks Festival, Glastonbudget, Rebellion Festival, Kaya Festival and a summer UK tour penned in. Top this off with some great feedback from rock legends Dave Navarro and Shirley Manson, and now seems to be a good time to be checking out The Kut.

The band’s ‘Bad Man’ music video and single, out 1st July, were premiered via Kerrang! Magazine and marks the final release from the ’Rock Paper Scissors’ EP. The music video also featured across the USA on the BBR show in over 50 cities. With gnarly grunge guitars, punk beats and gritty screams, the song tells the story of a woman who re-lives a series of flashbacks, causing her to create a cycle of revenge on a long distant Bad Man.

Q Magazine
“There’s a slice of angst-offloading gutter rock that’s a kissing cousin of Hole, but The Kut’s scuzz-covered family tree also stretches further back to the garage rampages of The Stooges.”

Classic Rock Magazine
“Marks the precise point in the Venn diagram where L7 meets I Wanna Be Your Dog meets Courtney Love, which is equal parts terrifying and a cause for long and rowdy celebration. Punk’s not dead, pass it on.” 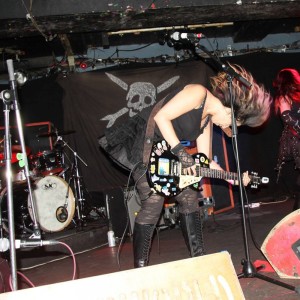